This week I visited the «William Morris & Co.: The Arts & Crafts Movement in Great Britain» exhibition at the Juan March Foundation, which will be in Madrid until January 21, 2018. The exposition invites you to deeply explore and appreciate the British Arts & Crafts movement’s main figure, the designer William Morris (1834-1896), and his multiple facets: the craftsman, businessman, poet, essayist, translator, embroiderer, weaver, dyer, illustrator, calligrapher, typographer, novelist, lecturer, editor and printer, defender of the historical buildings preservation, ecologist, political agitator, and socialist. 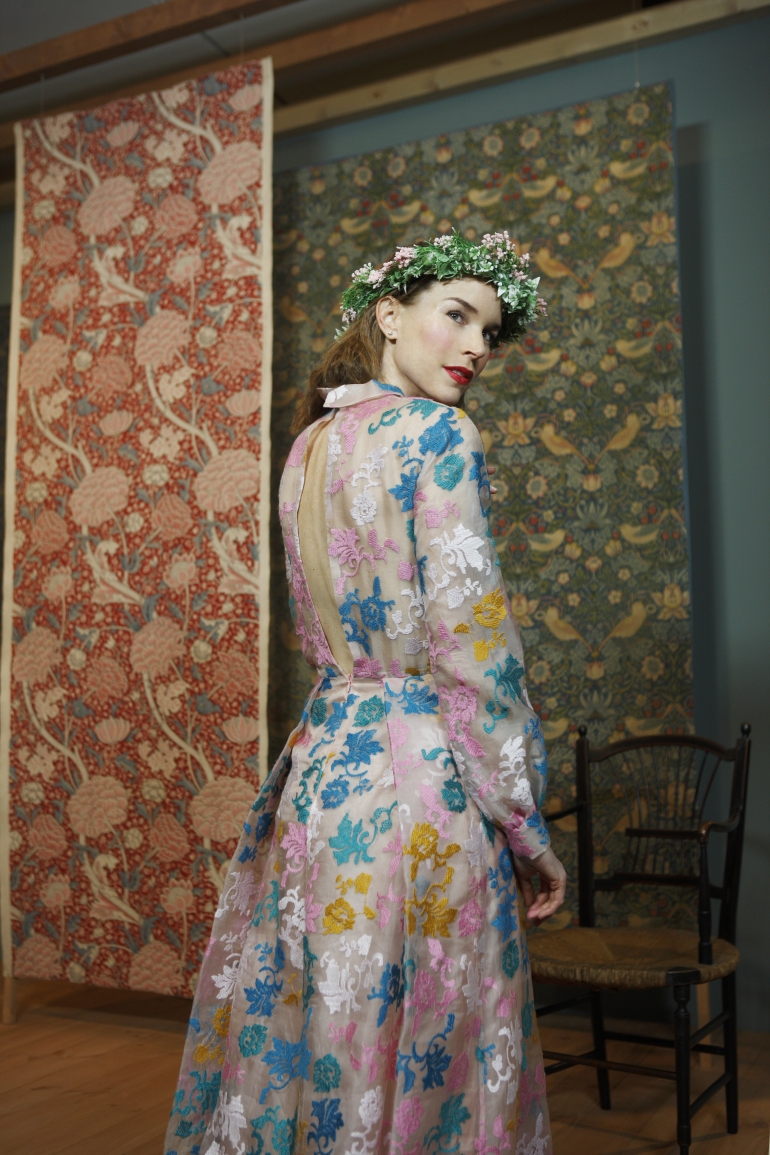 William Morris and The Company

The Industrial Revolution during the Victorian era had brought a taste for the mechanized and the artificial, which was soon rejected by many. Arts & Crafts wanted to find artistic creation from a totally different point.

Architects, designers, painters, and artisans came together to fight against a circumstance that affected the social conditions and the development of the people of that time. They wanted to approach a simple lifestyle that was closer to nature. They supported the return to the old crafts, which allowed an honest, simple, and fully-sustainable life.

Morris kept strong bonds with the Pre-Raphaelite brotherhood, a movement that also rejected industrial production in the arts and tried to approach earlier times, such as the Middle Ages or the Renaissance. For all of this, the versatile artist created an architecture and industrial design company that, after attracting people from all over the world, was named Morris & Co. With the new way of building art, Morris intended to reach the less favored parts of society. However, the products he made were so complex that, in many cases, only the upper classes could purchase his pieces.

Juan March Foundation brought about 300 pieces of all kinds: furniture, textiles, wallpaper, jewelry, glass, ceramics, metalwork, bookbinding, painting, and photography. The exhibition also displays pieces belonging to the Pre-Raphaelites and the Gothic resurgence period of those years in order to convey a movement that took place in the middle of the Industrial Revolution.

William Morris, while alive, was best known as a writer, poet, designer, and founder of Morris, Marshall, Faulkner & Co., a talent company that Morris dedicated to decorative arts and interior decoration. The movement’s ideology was based on William Morris’ ideas regarding the process of work, design, and life in general, and he was influenced by John Ruskin, his teacher, whose ideas would take him to read Karl Marx’s ones. Morris defended at all costs the «pleasure at work» and gave artistic and political shape to the discomfort caused by the darkest and most unfair aspects of an era which he tried to change with an exemplary passion. He strongly believed that everyone should have access to art and education, and he condemned the workers’ conditions during the Victorian England. William Morris also became one of the first ecologists to denounce the unhealthy situation in which people from big cities, such as London, lived during the Industrial Revolution.

William Morris was a pioneer of modern design. He was one of the first people to claim the restoration of the old unit –effective during the Middle Ages– between Arts & Crafts, between pure art and accessory beauty, or utilitarian beauty, of ornament and tools.

How Can I Bring William Morris’ Work Closer to My World?

I’m preparing a visit to the exhibition with a group of friends, my daughters, and their friends. This workshop could be the continuation of Morris’ ideas, which he wasn’t able to achieve due to the technical and productive limitations of his time. Nowadays, we’re closer to resources and tools that help us train a more sensitive spirit, one that is able to perceive beauty and to create. We can explore the path that Morris started.

During our visit, we will talk about life during the Victorian era and the big changes that the Industrial Revolution brought to society. We’ll also discuss about the union of fine arts and decorative arts, «major arts» and «minor arts».

I will share with you the workshop’s outcome through my social networks.