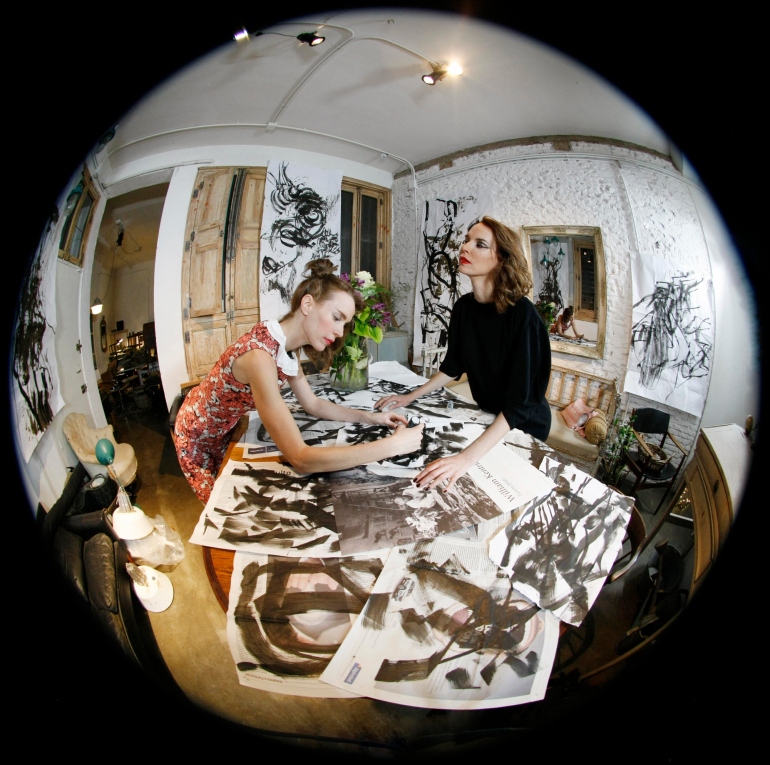 Graduated in Political Science and African Studies, academic qualifications in Fine Arts in Johannesburg, and studies in theater and miming in Paris, Kentridge has gained an extensive international recognition.

William Kentridge (Johannesburg, 1955) is renowned for his evocative drawings and animated movies exploring time, the history of colonialism, and the aspirations and failures of the revolutionary politics. His practice treats the nature of human emotions and memory, as well as the relationship between desire, ethics, and responsibility. William Kentridge’s work, which includes a wide range of media and formats, is characterized by dealing with conflict scenarios starting from a profound reflection about the creative process.

At the moment, you can appreciate the artist’s work in Madrid, at the Reina Sofía National Museum Art Center (MNCARS) and the Ivorypress Art Gallery.

For the artist, what generates the substance and journey of his different projects are both drawing and searching solutions for the world’s problems. All his works take, abandon, and retake similar topics and concerns: they extend and complement each other, resisting to be perceived as independent elements. That’s why recurrent elements and their own imagery can be identified in many of his productions.

In the Reina Sofía

You can visit the exhibition «More than Enough», where the artist uses Western culture references contextualized in Africa, revealing his ideological intentions and problematizing those images that colonialism projects on the continent.

Even from a strong political commitment, while working on the policies of apartheid, imbalance dynamics and the abuse of colonial capitalism, or different historical and literary events, Kentridge is far from predictable positions. He approaches the poetic gesture and the metaphor, especially through his puppets, animation films, and cultural references.

This exhibition is structured around his theater and opera works that are shown together with the different materials that emerged during the creation process, some of which derive from parallel projects, such as those that are finally employed in the scenography. The exhibition includes drawings, films, scenario models, posters, puppets, or costumes with which Kentridge cleans the stigma of the white man in Africa.

I was particularly moved by this exhibition. I lived in South Africa for two years and I witnessed the social problem that colonialism, apartheid, and the artificially-implanted needs generated in the country and in Africa. Currently, South Africa is seeking to solve its problems, and Kentridge’s work is one of many efforts to this end.

After seeing Kentridge’s work in MNCARS, I attended the opening of an exhibition based on the book Tummelplatz in the Ivorypress Gallery. The book consists of two volumes, each of which contains ten stereoscopic photo-engravings made by the artist. Tummelplatz was born from the wish of making virtual reality pop-up book to play with three dimensions and the essentially flat format of paper and books. The idea was to use stereoscopic photography to give an illusion of depth in images, of layers coming from the book towards the viewer. This project is part of a long list of books about renowned artists that have been published by Ivorypress since 1996.

Tummerplatz, said Elena Ochoa Foster, publisher of the book, «relates to the hidden space or room where free association takes place, the universe where unexpected thoughts and acts live, and the creation of a (sometimes chaotic) space where the activity in our brain (secret areas/rooms, outside and inside the self) paints landscapes”.

As you know, before I go to an exhibition, I make a research about the artist’s life and work to have all the information in my head beforehand. Once in the exhibition, I let the artist speak to me, I feel what moves me, what comes to me. After visiting the exhibition, I interpret the work, sometimes making sketches that I later use to paint in different media.

One way to interpret the artist’s work is through the photographs on this blog post. This time, I wanted to communicate with the pictures, the unfolding of the artist during the creative process, the conversations that a creator has with himself. In the original photo that inspired me, Kentridge is facing himself, and between between the two of them there is a sign that reads: seven things I’ve forgotten. It seems that sometimes, to remember what he has created in his head, Kentridge has to dive into his brain to find the ruminated ideas that he had in his dreams or on a walk during which he didn´t write down his thoughts about his next project.

I also shared the experience with my daughters, from whom I enrich and so do they. We visit together the work of artists and experiment in the workshops. This week, we will visit the Ivorypress. We won’t go to the Reina Sofia’s exhibition because the problems it exposes and their treatment are very rough, and I don’t want my daughters dealing with these types of issues at such an early age.

The workshop will consist on thinking about something we want to share, such as a dream we had. We will make sequential drawings where one calls the other, creating a storyline. So we’ll learn how to draw a storyboard. In a series of images, we will tell our story. Everything that appears in the image will have a reason to be there: when we look at the frame, we will observe a sequence of the story that we wanted to tell. Last, we will put the drawings together, creating a theatrical play in which we represent our dream.