The Museo Nacional Thyssen-Bornemisza and the Museo Sorolla, in a combined exhibition, showed more than 70 pieces of the Valencian painter Joaquin Sorolla with more than 60 pieces of cloth from more than 40 different cities.

The exhibition has been designed by the commissioner Eloy Martínez de la Pera, whom I had the pleasure to meet when I was invited by the Thyssen museum to a private visit to the exhibition Sorolla and Fashion guided by him. Eloy explained to us that “this exhibition is a tale that will tell us a story through the objects of the portrayed women. And Sorolla is the one to tell all those stories thanks to his brush-strokes. And we will see not only fashion back then, but also the importance that this painter gave to women.” 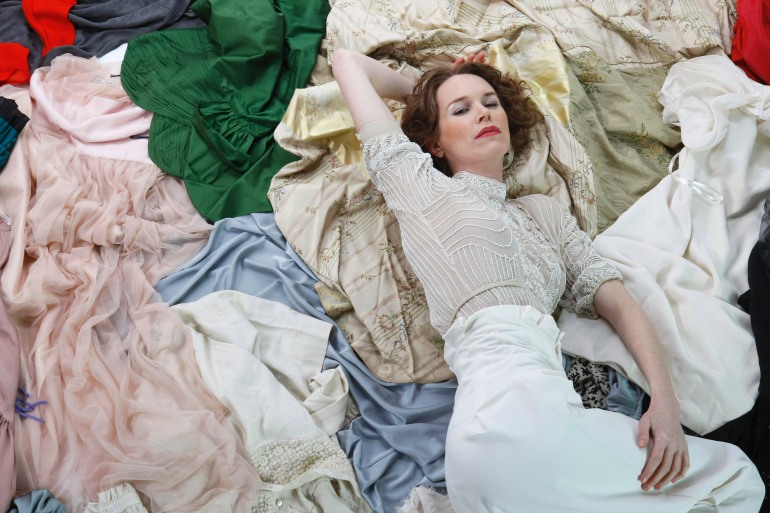 Sorolla, Witness Painter of Society of His Age

Sorolla, through his painting, became a privileged observer of the changes that were taking place in the transition from the XIX to the XX century in the big cities of the world, such as Paris, London, and New York. These are cities to which he used to travel very frequently to portray the aristocratic and high-society ladies and their families, becoming, through his work, a chronicler of the arrival of modernity in feminine fashion.

Sorolla, under his careful eye of great sensitivity and his skilled hand for painting, manages to communicate to us different emotions and feelings with his paintings. One can guess the personality of Clotilde, the painter’s wife, who always posed with self-confidence and patience for her husband. Distinguished and elegant, she set trends with her dresses. In the paintings of his daughter Elena, he reflects the sight of a modern woman who feels good about herself. Elena posed with a dress that’s pure actuality, Delphos dress, designed by Fortuny.

Through his portraits he expressed the way of being and feeling of the bourgeoisie and even of royalty, who pose with pride for him. With his brush-strokes, we delight ourselves with the exquisite velvet, the tulle’s transparency, the feathers’ softness, the sublime embroidery, the small flashes of light of the sparkling beads and sequins of the party dresses reflected in his paintings. In his work we can see how fashion transformed, passing from a more classic and nostalgic cut to more modern lines that echo women’s new dressing and feeling trends.

In the beach scenes included in the exhibition, we are enchanted by the mastery and sensitivity with which Sorolla painted light in all its shades, and its representation in water. We can almost smell the sea and the breeze of the coasts.

In the second half of the XIX century, beaches became a place to visit by doctor’s recommendation due to its therapeutic properties. Sorolla enjoyed painting the light and the beach scenes, the sophistication of the dresses, the straw hats, and the complements. He painted clothing in such way that we can even appreciate the fabrics’ softness and feel the linen’s and cotton’s freshness.

Fashion is sometimes labelled as shallow and trivial, but we can’t forget that it is witness and reflection of historic changes, of society’s necessities and concerns. Fashion is art and functionality at the same time. By the end of the XIX century, fashion began to be recognized as an artistic expression and tailors started to sign their creations. Some figures emerged, such as Paul Poiret (1879-1944), Madeleine Vionnet (1876-1975), or Jeanne-Marie Lanvin (1867-1946); all of them present in this exhibition.

Sorolla, through his trips, was part of the modern life that emerged in the cities by the end of the XIX century. He lived events such as the Grand Prix of the World Exhibition in Paris, in 1889, and the development of London’s subway (1863-1884), which allowed women to move on their own through the city. He was also a witness of how women started to organize themselves and fight for voting rights in England. All of this meant a change in society, and therefore in fashion. Women released themselves from the corset and crinolines and they dressed to feel good with themselves. Fashion’s evolution talks about changes in women’s position in society, of the beginning of their emancipation; it talks about a dynamic and active woman that fights for equal rights for both sexes.

Eloy Martínez de la Pera says that Sorolla was the first Spanish coolhunter, influencer, and personal shopper. The exhibition includes some of the letters he wrote to Clotilde, in which he describes and sketches fashion in Paris, London, and New York. The painter, who loved fashion, sat trend through his family’s portraits wearing cloth brought from abroad, and he made all Spanish society ladies want to dress with the latest trends, just as Clotilde and her daughters.

Sorolla and Fashion for Me

When exhibiting at the same time a portrait and a dress, a dialogue stablishes between the artist’s work and the clothes of the time, like if the painting was a mirror in which the garment is reflected. With Sorolla and Fashion, a new way of understanding Sorolla’s work raises: the fashion-lover artist and witness of the changes at the beginning of modernity in contrast with the tradition focus of his work as painter “of the Light”.

In this week’s workshop, after visiting the exhibition, we will talk about fashion as artistic expression and its evolution until our days. We will later choose from a fashion magazine the look that likes us the most, we will portray the workshop’s participant that we have in front of us and we will paint him or her wearing that clothing. For me, the workshops’ goal is to solve a problem that it’s at our reach, and to do it without having a formula for it. Don’t you think it’s the best way to learn?