The exhibition at Thyseen-Bornemisza Museum offers an artistic dialogue between two leading figures of the avant-garde movement by the end of the XIX century and the beginning of the XX century: Henri de Toulouse-Lautrec (1846-1901) and the Spanish artist Pablo Picasso (1881-1973). You can visit the exhibition from October 17, 2017 to January 21, 2018.

Picasso’s artistic career lasted 70 years, while Toulouse-Lautrec’s lasted only 15. Their paths were very different from each other, but they also had many similarities: they were both artistic geniuses from a very early age; they both felt an irresistible attraction towards Paris in their youth; and they both experimented with a formidable control of drawing, of freehand stroke. They never met. Picasso arrived to Paris in October 1900; Toulouse-Lautrec, already too sick, would pass away a year later.

The contrast between their works in this exhibition offers us the possibility to dig in our comprehension of contemporary artistic culture.

Toulouse-Lautrec’s staging of urban life and his radical modernism, just as his initiative of integrating high and low culture, had a decisive influence in the generation of artists that followed. He was a mater in the art of drawing and line. Through caricature, the parody and the exaggeration revolutionized the artistic language of the time and opened the doors to modern portrait. In both, his paintings and his colorful posters, he left us an extraordinary repertoire of images representing the marginal environment and the frenetic nights at Montmartre.

He portrayed, like no other artist did, women of marginal life. Under his gaze, caricatured and melancholic at the same time, the brothels become intimate and everyday scenes. In his compositions, of shapes and poetic coloring, Toulouse-Lautrec changes the sordid world of the ladies of the night in the late-nineteenth-century Paris into something delicate and exquisite under his gentle gaze. The topics regarding eroticism and prostitution captivated the artist because they offered him the possibility of approaching nudity with a modern vision thanks to the disinhibited poses and movements of the women in those environments.

In the exhibition, along with Toulouse-Lautrec’s posters and paintings, we see pictures of Can-Can dancers. There is, for example, an advertising poster drawn by Toulouse-Lautrec which announces, with large print, that Jane Avril will dance in the Paris Garden and beside it there’s an autographed photo of the beautiful ballerina in which she is lifting a leg with the same gesture with which she appears in the poster. At this time, painters started to lean on photography as a tool to study poses and postures that incited them to study movement. By 1978, Eadweard Muybridge photographed The Horse in Motion, a series of photographs where the legs of a galloping mare were recorded in unpublished positions.

Picasso, the most restless and revolutionary artists of the XX century, extremely perfected the skills he received from the prior masters. Picasso used to say artists must copy great artists. Picasso absorbed and gobbled up everything that was artistically happening around him. What stimulated him was trying to imitate the avant-garde artists to end up doing the same they did, but much better. Every experiment Picasso began just with the goal to imitate lead him to work until he established foundational ideas about art.

In that process, “hunting the being”, as Oteiza said, was essential for Picasso. During his experimentation he raved, transgressed, got lost, and found something new due to his great control of his references, both classic and unconventional. He experimented with great confidence, since he knew he had a penetrating sight, much trained, that he freed from prejudice in Paris. Picasso had traveled to Paris, art and intellectuality metropolis, where he at first imitated Toulouse-Lautrec’s style. The French painter by that time was well-known; he was very famous. Picasso said, I also draw, I’m also Toulouse-Lautrec, I can also make a living out of selling my posters and paintings. Picasso painted posters and advertising drawings that could be easily sold, with very shocking and iconic images of synthesized motion that hooked the spectator with his work. 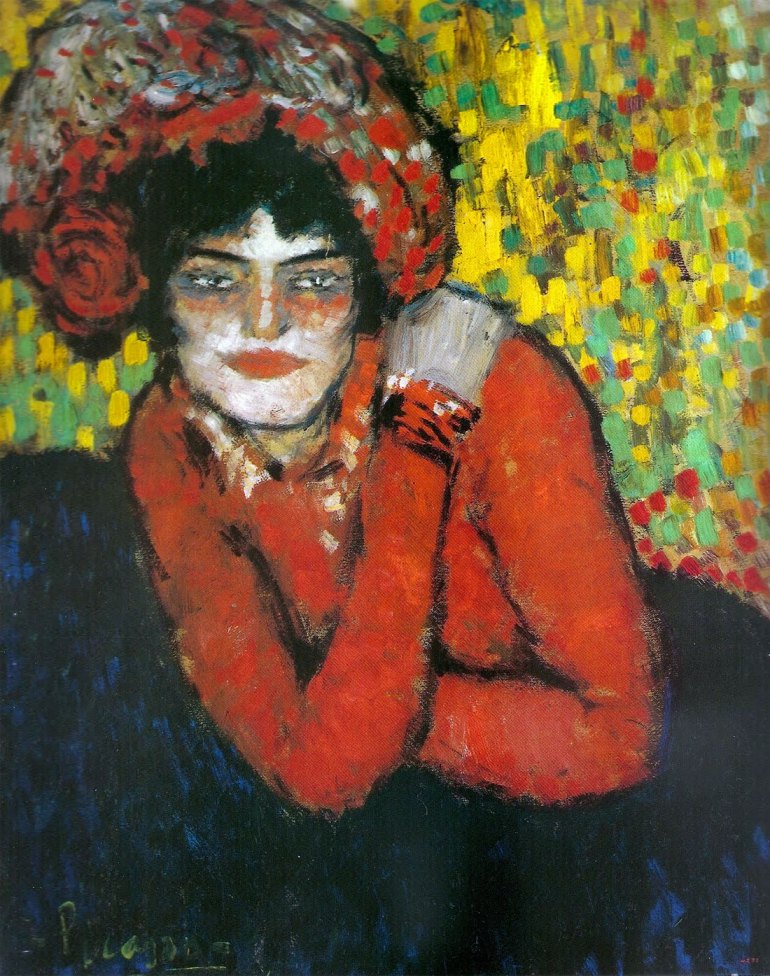 Picasso shared the same predisposition towards drawing and lines than Toulouse-Lautrec; in his portraits he also used synthesized graphic and distortion of shapes that characterize caricatures. His cubist portraits will continue to be caricaturist and, in the last decades of his life, the exaggerations of deformation and caricature would come back to his work with strength.

I believe that both artists drank from very much alike historic fountains, like for example Ingre’s and Dega’s but also Greco’s. Picasso gave a step forward by subduing shapes into a process of metamorphosis.

With Picasso it’s impossible to determine a formal guideline fixated for his restless, creative personality outside that constant thirst of invention and change. In any case, his insatiable look, predatory, is what makes him Picasso.

In this exhibition, you can see Toulouse-Lautrec’s mark in Picasso’s work from the late XIX century and the early XX century, to the point in which there are some posters that at first glance you can’t recognized to which of the two artists it belongs. During that time, Picasso used the French artist as a reference to later, as you can appreciate in the exhibition, evolve towards the flattening of the scenographic cube of perspective, a job that would end in cubism. Picasso imitates Toulouse-Lautrec’s life and drawing. When Toulouse-Lautrec died, the legacy of the French artist in Picasso died with him.

Picasso takes other paths, Cezanne’s job touched him and studying his work makes him experiment with a kind of perspective that was different to what had been seen by the time: cubism. Picasso absorbs and reinvents it all because of his great talent.

My Interpretation of the Exhibition

The objective of the curators is well achieved: the dialogue between these two painting genius seems to me very stimulating and very well presented. The relationship between the work of both artists expanded much beyond the direct influence Toulouse-Lautrec’s work had in Picasso. Comparing specific works, it’s shown that the French nectar -Toulouse-Lautrec’s work­- from which Picasso drank kept running in the veins of his work through deformation and caricature. It’s with the influence of Toulouse-Lautrec’s work that Picasso starts to synthesise ad distort shapes in an almost caricature-like way, and this remains during his whole life.

Precisely because of this, the exhibition’s true gem was for me on the second last room. There was shown the tapestry of Les Demoiselles d’Avignon that Picasso hanged in his house, Villa La Californie, in Cannes. In the exhibition, next to the tapestry, there was a famous photography of Toulouse-Lautrec and photos of Picasso’s house where we can see the set repeating: Picasso had hanged in his house the tapestry and beside him Toulouse-Lautrec’s photograph. Picasso admired him, or at least he was grateful to him; maybe thanks to Toulouse-Lautrec’s work –which he shamelessly copied when he moved to Paris– he was able to survive and keep working in the city and become the genius of the XX century painting.

Workshop about Picasso and Toulouse-Lautrec

I want to visit the exhibition with my daughters to see what they have to say, what catches their attention, to learn with them. I’m under the impression that it’s not an exhibition that can be easily understood by a child, the dialogue between the works of both artists, one who is finishing his career and the other one who is starting it, is more of an adult exhibition.

For the workshop, I will put in our experimentation table some watercolor paper, pencils, crayons, pastels, watercolors, and acrylics. I will propose for them to experiment by mixing the different techniques in a free game. I will also put in the table moldable dolls, those wooden jointed dolls that are used to study poses. We will paint figures in different positions that we will later cut into pieces and glue in another paper to make a collage.

Only by designing the workshop, I get excited and I want to start experimenting as soon as I finish writing… I will tell you all about the experience!