I have visited the San Juan Bautista Church, in Alarcón, and its mural paintings several times; but this week the visit was more than special, unforgettable. Jesús Mateo, the artist, welcomed me into his ship to travel to other worlds and told me about his creation process, the seven years he spent painting between its walls, and the meaning of their shapes. Every time I have visited the church, I have appreciated different things by reading its paintings. Because, as Jesús Mateo explained to me, each one of us sees and feels what we have inside; the work speaks and awakens in each person a different world. Everyone agrees, he said, on the feeling that this space has something special, a feeling of being in a non-time, outside the daily reality, safe, as in a cave.

The Desacralized Church of San Juan Bautista and Its Mural Paintings

The artist told me about how he discovered the church on the night of June 11, 1994, by chance, after a confirmation mass where he met Luis, Alarcón’s parish priest at the time. Luis offered him to make an exhibition in the church, in an attempt to bring the place back to life. Jesús Mateo does not believe in the world of art galleries and merchandise, so although he did not intend to make an exhibition, he asked Luis to show him the place.

San Juan Bautista Church has been deconsecrated for 200 years, it has been used as a stable, the sacristy has been a public urinal, it was also a central to supply water to the town and, by the time, it was used as a warehouse. Jesús said that when he entered the place, in ruins and naked, he saw the painted walls: he then understood that he was going to carry out a task, that he was going to fill with life the elegant Herrerian-style construction of the XVI century that was erected on a Romanic church.

The Story Behind the Paintings

It took Jesús Mateo a whole year to persuade Luis, who took him for a crazy young artist -he was 22 years old, back then-, sent him home twice, and tried to make him forget the idea of painting the church’s walls. Since the parish priest didn’t want to hear a word about the young artist’s project, Jesús  had to send a friend on a 007 mission to copy the church’s plans in order to make the scale models. Jesus Mateo kept the models and hundreds of sketches he made to present his idea, certain that he would one day he would paint the mural paintings.

Jesús Mateo told me that one day some friends went to see him in his studio, saw the model in a hole-and-corner, and so they began to make it possible to materialize the project. This is how it began the adventure of creating this magical area that teleports you to a place where you feel like in the mother’s womb.

While contemplating the paintings and enjoying the privilege of being able to talk to the artist in front of his work, I was delighted imagining the anecdotes Jesús Mateo was telling me.

I asked him: How did you know when to stop? You never knows when to stop, because a creator hardly feels that the work is fully finished. You have to learn to listen to it and, once it has been filled with life, the work itself will start pushing you away, saying goodbye. Jesús told me that during the solitude of the working nights in the church, a bat accompanied him; and it did so for seven years. The Ministry of Culture installed some glass doors in front of the central doors inside the nave during the building’s restoration work. The bat, which used to go in and out through the main gate and fly in-between the paintings, died. That night Mateo knew he had finished his mural paintings in Alarcón. 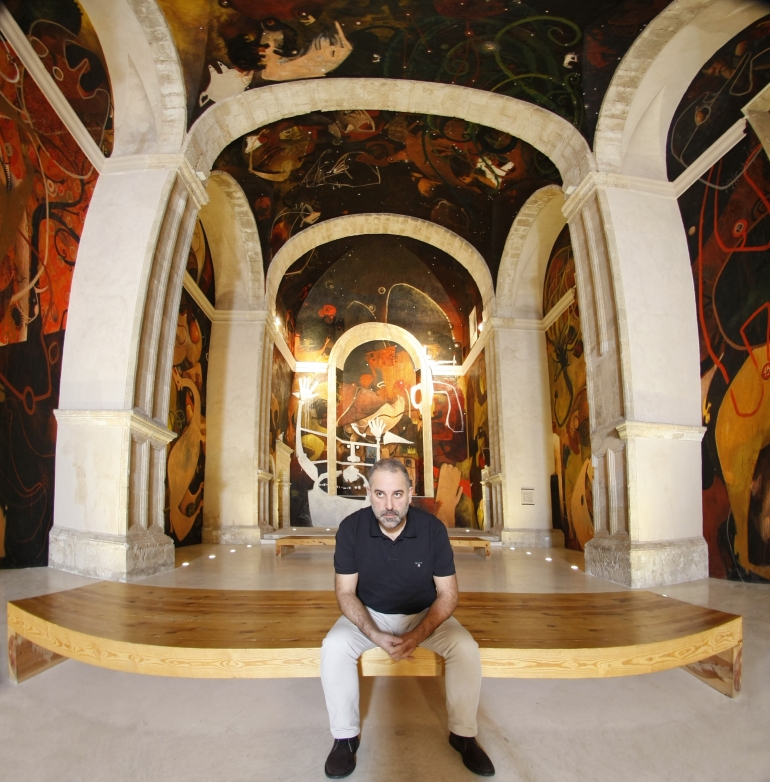 Jesús Mateo’s paintings in Alarcón will remain for posterity as a unique creation made in a personal language constructed by symbols and signs that tell us about the struggle between the artist and his work and the struggle between the mankind and its environment, its nature. Therefore, the worlds prior to the presence of man on Earth, the origins of life, the primitive life-forms that made us and that we will make again, the dreams, the ghosts of our own past, the axis mundi, the illuminated cavern, the celestial sphere, the silver tongue, the tree of life, the cosmic tree, the anguish, the anxiety, the finitude, the individual life itself are the ideas that have defined a unique plastic identity. Through figures that represent the vegetal, animal, and mineral worlds, the artist is tying, sewing, and shaping other primary and secondary structures and composing this world with a unique language.

Jesús Mateo paints an overflow of uncontrolled situations that undergo the volumetry of construction. It looks like if the paintings were sonorous but, nevertheless, their sound is deaf; it looks like they were moving, but they are still. This unique value has been globally recognized. In December 1997, UNESCO declared these paintings of world artistic value.

Jesús Mateo and His No-Place

Jesús Mateo explained to me that he tried to immerse himself in that initiatory moment in before coming into the world, that the paintings represent a search for the dream he had in the womb before he was born, the search for the magical moment of creation, the first moment of the initial explosion. He tried to encapsulate that moment in which you are created.

«When you are in the church, you feel like in a state of grace, you feel good, sheltered, protected, as our ancestors must have felt when they entered the cave and painted those shapes that we don’t known if they are magical, transcendent, religious, symbolic, allegorical, or artistic. We don’t know; they are there. It’s about using the shelter to magnify it or to make it closer -is a lighted cave, the womb, or Jonah´s whale- even though the space is that big.»

The artist painted by himself the 1,500 square meters of the church in an intimate relationship with the architectural structure. They were, he said, «wonderful years, without coercion, without censorship and without any commitment other than the one I acquired with myself.»

The entrance to the church is through the sacristy, a passage between the present world and the world inside the building, where time doesn’t seem to exist. This space prepares you for the trip to the interior and for the contemplation of Jesús Mateo’s murals. It’s in this space where you can read what Saramago wrote when he visited the church, The colors of the Earth. Saramago said that Jesús Mateo managed to «melt into a single expression, and I can almost say unison, like a chorus of full simultaneous voices, like a polyp perspectively políptico gathered in a single vanishing point, the huge walls that rose from the ground dragging with them all the deaf colors of the earth to meet the luminous colors of the air. (…) I don’t know if San Juan Bautista Church in Alarcón will be regarded and considered as the Sistine Chapel of our time, but I do know, both by science which I believe true and by prophetic intuition, that the painter Jesús Mateo was born from the same family tree that gave its best fruits in El Bosco and in Bruegel el Viejo. Like them, Jesús Mateo explains the mankind. For the visible and the invisible.»

The intellectual reflections, photographs, and compositions that the mural paintings have inspired to various personalities and artists such as José Saramago, Antonio López, Gustavo Bueno, Ernesto Sábato, and Francisco Brimes can be seen and read in the books exhibited at the entrance. The books I liked the most are The Ninth Day of Creation. Wall Paintings by Jesús Mateo in Alarcón and A Photographic Essay on the Murals of Alarcón, UNESCO.

The Workshop of the Week

This week’s workshop is the way through which I can go deeper into the world created by Jesús Mateo in his mural paintings. This workshop is very special, since it had been designed by the artist himself. Jesús Mateo suggested for us to paint a wall in our experimentation. He invites whoever takes part in this workshop to «try to paint plants that are not, animals that are not, and minerals that are not. In each of their shapes… This way they will be able to paint plants that will be, animals that will be, and minerals that will be, also.» I’m looking forward to our next trip, in which we’ll go deeper into Jesús Mateo’s artistic world to better understand it! I invite you all to participate and do so with your children. If you’re not willing to use a wall, you can use a large piece of paper fixed on the wall.